Lassa fever is an acute viral haemorrhagic illness. This is where disease causes internal damage to the organs of the body, often resulting in heavy loss of blood. It is caused by Lassa virus (LASV), a single stranded RNA virus of the Arenaviridae family. The virus is primarily found in multimammate mice (Mastomys natalensis) which are native to West Africa, and act as a reservoir of disease. The virus is transmitted to humans through contact with infected mice or their faeces and urine, the latter often via contaminated food. Human to human transmission is rare.

The overall case fatality of Lassa fever is around 1-2% often due to multiorgan failure, but severe disease is found in around 20% of cases with difficulty breathing and blood loss (haemorrhaging) common symptoms.  Higher risk individuals, including pregnant women and children are at greater risk of severe disease and death. In cases of mild disease with vomiting, diarrhoea, chest pain, and headaches are observed as common symptoms and most individuals will recover in 8-10 days post infection. However common (and often permanent) long term side effects such as deafness can be observed in 20% of cases, both mild and severe.

On-going outbreaks in Nigeria have resulted in unprecedented mortality. Consequently, the World Health Organization (WHO) has listed LASV as a high priority pathogen for the development of treatments and vaccines. Currently, there are no licensed vaccines to protect against LASV infection. 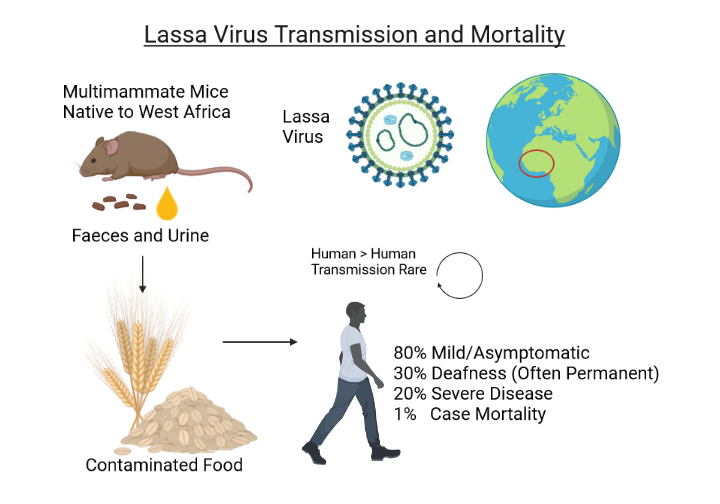 Lassa virus has a single antigen on its surface, a viral glycoprotein that is the focus of vaccine efforts. Both antibodies and T cells appear to play different roles in natural infection. T cells are important for clearing up active infections whilst antibodies mostly appear post infection and may play a role in long term protection. A successful vaccine should induce both T cell and antibodies to maximise potential protection. At the Jenner Institute we have developed a vaccine based on the viral vector ChAdOx1. To date vaccine studies in mice have shown robust induction of neutralising antibodies and T cells, and challenge studies in guinea pigs have shown protection against lethal infection. We continue to assess the success of the vaccine in pre-clinical models and hope to move into human clinical trials in the near future. 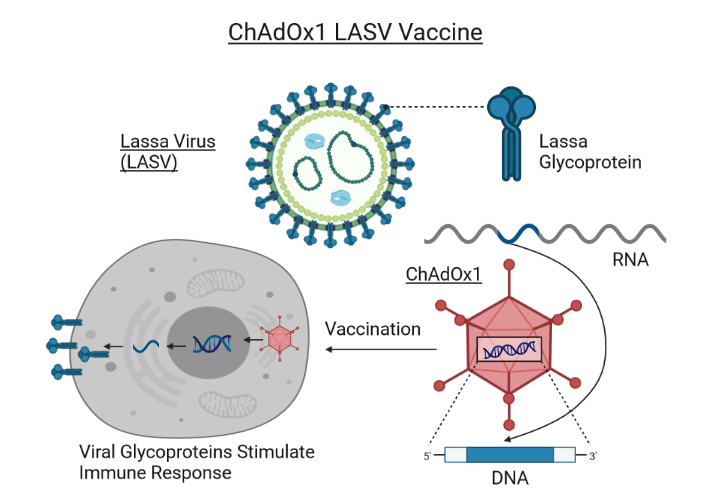