Rift Valley fever (RVF) is a viral zoonosis caused by the RVF virus (RVFV), an RNA virus of the Bunyavirales order that was first isolated from livestock on a Kenyan farm in 1930.

It is primarily a disease of ruminants such as sheep, goats and cattle but human infections occur following close contact with infected animal tissue and body fluids. The effects of RVF are most pronounced in newborn lambs and pregnant ewes where mortality and abortion rates approach 100%, respectively. In humans, the clinical spectrum varies from a mild febrile illness to the more severe manifestations of encephalitis and haemorrhagic diathesis that are frequently fatal.

RVFV is mainly transmitted by Aedes spp. mosquitoes, with a wide range of other mosquito species playing a role in virus dissemination during epizootics. The global distribution of the mosquito vectors has contributed, in part, to the spread of RVFV to much of Africa and parts of the Middle East and there are growing concerns of RVFV spread to other parts of the world. This, together with its potential use as a biological weapon, underlies the strict animal import controls and the inclusion of RVFV on the lists of notifiable diseases in many countries where the disease has not yet occurred. 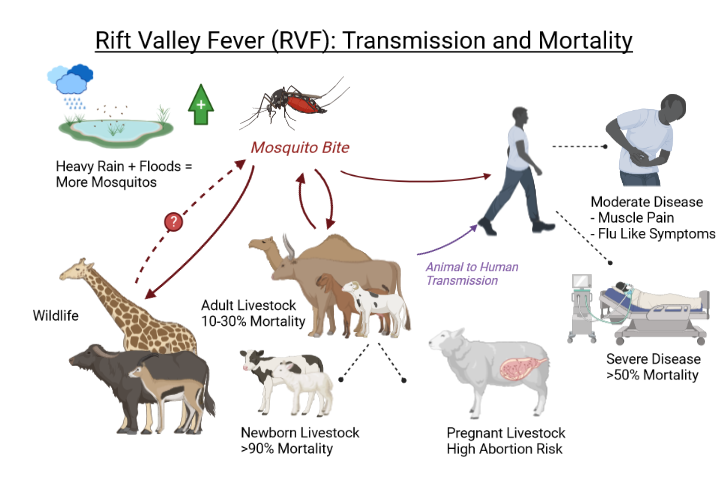 To date, Kenya has had the highest frequency of RVF epizootics and the causative virus is now enzootic in six of the eight provinces in the country. Because RVF epizootics tend to be worst in areas where the virus is enzootic, Kenya and other countries with previous RVFV incursions will continue to bear the brunt of RVF for years to come unless effective control measures, including vector control and vaccination of susceptible hosts, are put in place. Current livestock vaccines are based on live-attenuated or formalin-inactivated virus. However,  formalin-inactivated vaccines require repeat immunizations to achieve protective efficacy and, though live-attenuated vaccines (E.g. Smithburn vaccine) confers long-lasting immunity, it is not safe for use in pregnant animals. No licensed vaccine is available for use in humans.

This Programme’s approach to a RVF vaccine

In our vaccine programme, we exploit synergies in human and livestock immunology to accelerate development of candidate vaccines for deployment in humans and the respective animal hosts of infection. Using this approach, we have developed ChAdOx1 RVF, a novel chimpanzee adenovirus vectored Rift Valley Fever vaccine, that is highly efficacious in multiple target livestock species (sheep, goats, cattle). ChAdOx1 RVF will soon enter human phase I clinical trials in the UK and East Africa and, in parallel, will be evaluated in livestock field trials in Kenya. 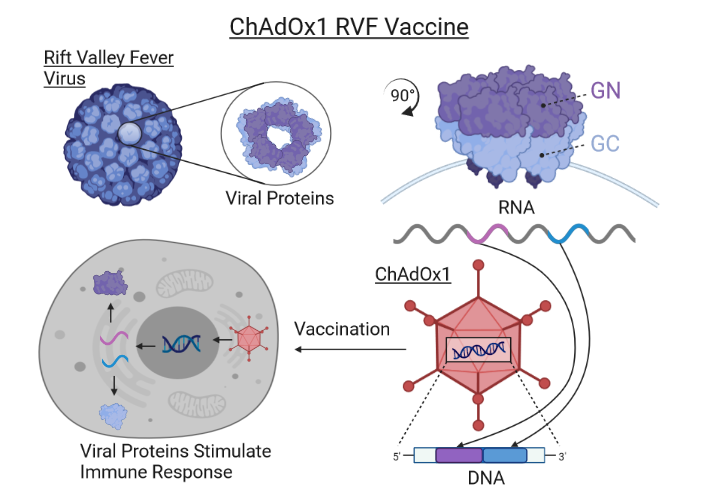