Viral haemorrhagic fever (VHF) describes a severe multisystem syndrome, characterised by very high temperatures and internal bleeding, and is associated with high levels of morbidity and mortality. A number of viruses within the Bunyavirales order can cause VHF with significant impact on human and animal health. These viruses are endemic across large parts of the world and can be transmitted and transported by a wide variety of hosts including ticks, midges and mosquitos.

The aetiological agent of Crimean-Congo haemorrhagic fever (CCHF), CCHF virus (CCHFV), is a single-stranded, negative sense RNA virus within the nairovirus family of the Bunyavirales order. CCHF is the a widespread tick-borne viral disease affecting humans and  associated with case fatalities ≥30% during outbreaks, while for large case studies the fatality rate is generally lower. CCHFV is endemic in many regions, such as Africa, Asia, Eastern and Southern Europe and while reported CCHF cases have risen significantly between 2000–2009, it is widely accepted that cases are still under-reported.

CCHFV is maintained in an enzootic cycle involving wild and domestic mammals. While these animals develop a transient viremia, they remain asymptomatic, but are considered an important reservoir, and direct transmission to humans involved in the slaughter and butchering of infected animals is a common infection route.

A naturally occurring and closely related VHF caused by an equally devastating, veterinary-specific nairovirus of sheep and goats (Nairobi sheep disease virus (NSDV)). This virus spreads through the feeding of infected ticks and is of low risk to humans, but the VHF that ensues when naïve livestock (sheep & goats) are moved into enzootic areas is regarded as one of the most pathogenic in small ruminants, with mortality rates up to 90%. Maternal antibodies are thought to confer protection to young animals in enzootic areas; these animals are subsequently protected by their own immune response post-exposure to an infected tick. NSDV was first recognised in Kenya and subsequently the virus has been found in several parts of East Africa and also shown to be widespread in India (where it is called Ganjam) and has also been found in China. 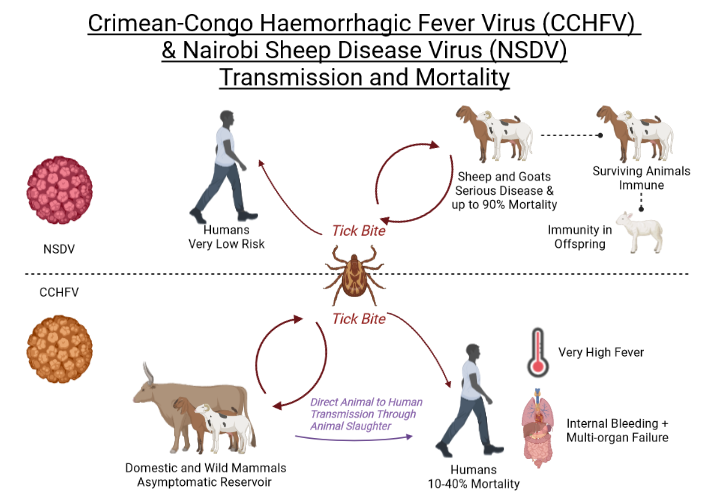 We are working to delineate and understand the underlying immunology post infection of these VHF (funded by BBSRC) and are using this knowledge to develop vaccines (funded by the Dept. Of Health). 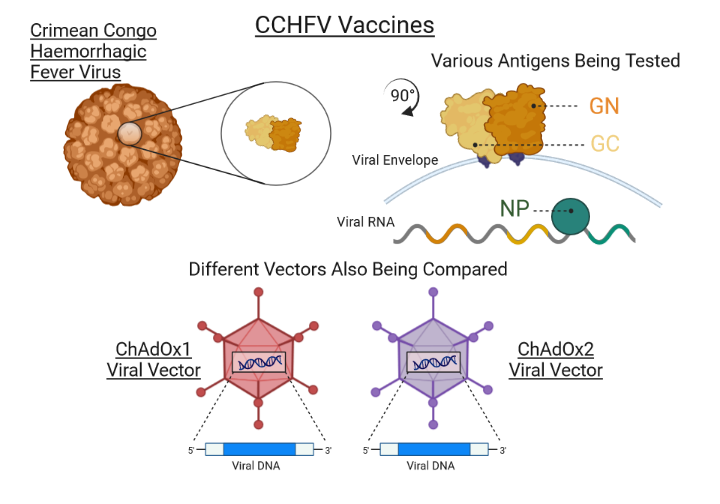